This time last week, I was in a plane, on our descent into Houston, TX!  Jay & I were lucky enough to be able to attend Mike & Vickie’s wedding, which was a beautiful event at the Alden Hotel in downtown Houston.  While I was honored that they asked me to make their chocolate favors for them, I could never have imagined what it would take to get 400+ pieces of chocolate (peanut butter & caramel if you were wondering) 1,622 miles from northern NJ to Houston, TX!  I’ve learned that shipping chocolate safely to warmer climates is supremely expensive, but if packed correctly, they definitely hold up well.  However, since I couldn’t think of a safe way to ship the favors assembled, we had a bit of work to do when we got to our hotel room last Friday night, folding favor boxes and repacking the chocolates from their shipping boxes to the favor boxes.  But when you love what you do (which I do!), all that extra work doesn’t even seem like work when you get that finished product together & see how happy it makes your clients!

Here are some of the photos of this latest Sweet Element chocolate favor adventure & the lovely bride & groom! Congrats Vickie & Mike! 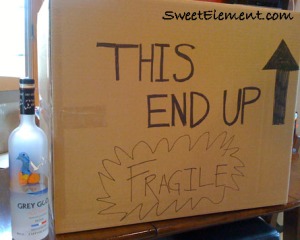 Here’s the 43+ lb behemoth package that we mailed via Fed Ex.  There’s a standard sized 750 ml Grey Goose bottle next to the box for scale. 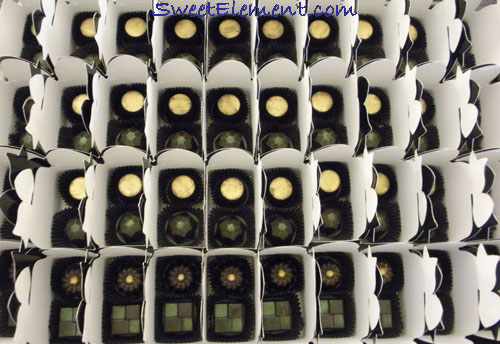 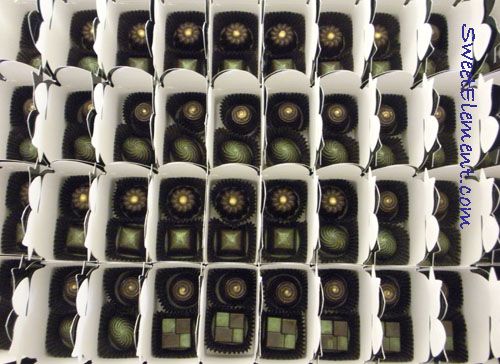 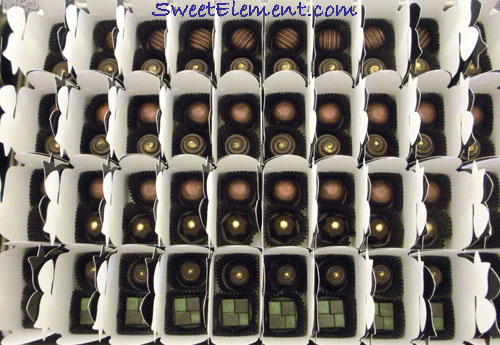 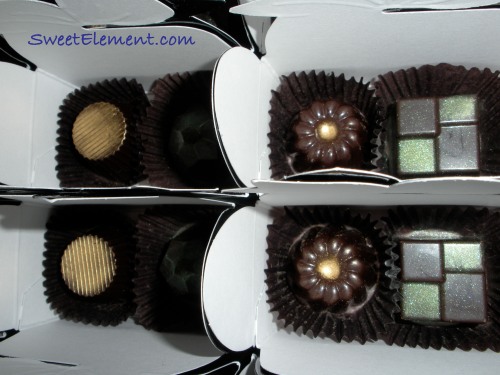 Close-up shot of some of the chocolates. 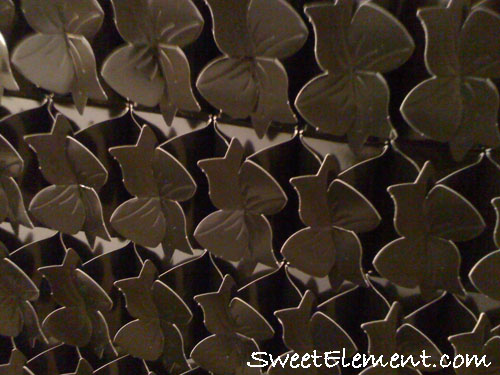 Close-up of the favor bow box-tops. 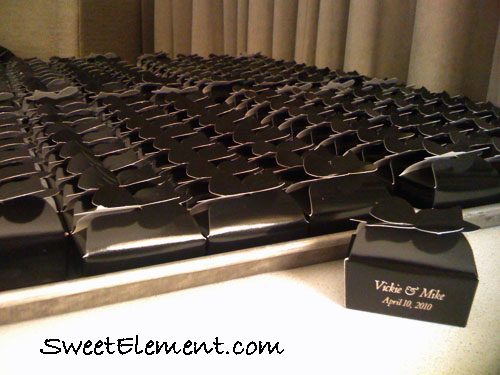 160 chocolate favor boxes all ready to head to the wedding! 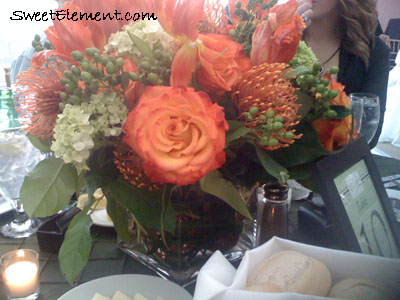 If you look closely, you can see the favor boxes to the right & left under the flower arrangement. 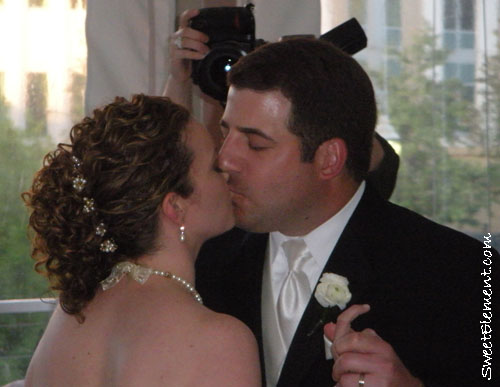 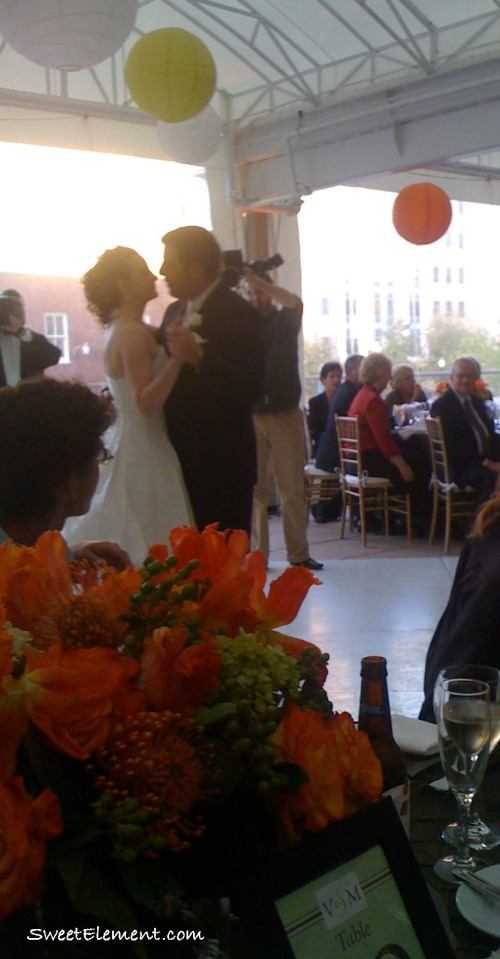 I know it’s a little blurry, but I still love this photo. It was a gorgeous roof-top wedding! 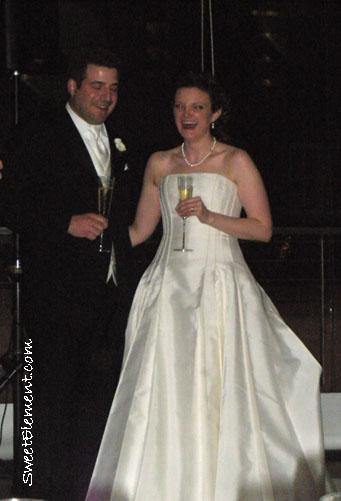 The happy couple enjoying some champagne during the toasts 😀 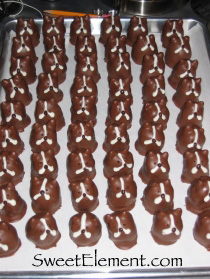 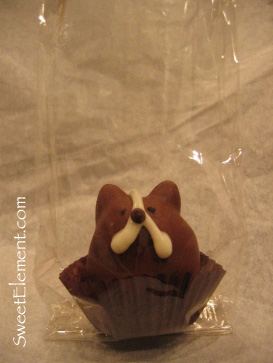 It feels like I was making these chocolate dogs with my partner – in – pastry – crime AGES ago, but in fact it was just a week ago that I was being a total spaz about a packaging disaster that left me running around NJ & NYC looking for replacement packaging for 145 dogs.I knew things were going just a little too well. I wouldn’t have been able to make these little boys so easily without Lisa – so THANK YOU!!! Twas a long one night project to individually hand make EACH dog one at a time. Yes, I know I repeated myself in that last sentence, but believe you me … it was laborious. Even with the control freak that I am having the almond ears pre-matched out for each dog, and my amazingly cold hands being able to roll out the little ganache bodies without much if any meltage, there were some difficulties in the process that got worked out … by the time we were on the last of four trays of these puppies. All in all though, production went amazingly well. The next day we did finishing touches with the piping of the white stripes and the eyes and nose and breezed through that so quickly I was all looking forward to a few drinks out.

Cue scary music … *Dum Dum DUM!!!!* As I started packaging the finished dogs, Lisa opened the remaining three boxes of containers … to find them … EMPTY. So here we are:

*It’s Sunday night and I am calmly, quietly FREAKING OUT
*The favors needed to be delivered on Tuesday morning
*I had idiotically given the bride a sample container and she loved it
*The containers were specially ordered from a company in CA
*When I looked up the containers they were BACKORDERED UNTIL JANUARY 2007
*The dogs had to be packaged so they would be protected and stand upright
*Every store is closed as it is 9 PM
*I have ONE DAY to find enough packaging for 145 chocolate dogs

So, unable to do squat, we ended up going out drinking anyways to our old landlords’ new bar in Hoboken, Carpe Diem with Jay & Jeff. A few vodka and sodas in and I started feeling the packaging panic.

*I decided NOT to deal with the packaging f*ucknut until I was calmer
*Our internet & landline connections were all screwy in the morning because we were having a new line run and I was trying to communicate with the bride-to-be and SO didn’t need that
*Ate some fortifying oatmeal (so needed it too)
*Had NOT ENOUGH coffee
*Went to the following stores to try to find packaging:
NJ Contenders for Packaging
-A.C. Moore (bought tiny bags that didn’t work)
-Party America (nada)
-Party City (more nada)
-Hallmark (still nada)
-Staples (got tape to seal the bags that was crap and didn’t stick)
-The Container Store (had gusseted bags that I thought would work – but     they were SOOOO expensive so I opted not to buy them)
-Michael’s (back to nothing)
-Chef Central (did buy two cool coffee cups – but NO packaging options)

NYC Contenders for Packaging
-Hallmark #1 in Port Authority (zippo)
-Hallmark #2 in Port Authority (ditto zippo)
-Sweet Factory (nothing, nothing, nothing)
-National Wholesale Liquidators (amazingly nothing)
-Pearl River Mart (had cool clear chinese plastic takeout containers – but     not 150)
-Pearl Paint (main location) (hard for me to not get distracted here)
-Pearl Paint Craft Store (see above comment)
-Pearl Plastics (dirty and nothing)
-Pearl Rubbers (wasn’t even open)
-Broadway Panhandler (smaller store now in it’s new location which I           really don’t like – had nothing)
– Evil NY Cake – the store reeked of pee, and I was the very last customer     there before they closed, but they had the bags, and I bought two sizes         just to cover my ass since they had the bags displayed where I couldn’t         see the bottoms very well as that was what was taped to a board.

Upon arrival home, I tried out the bags from NY Cake and I was freaking and disappointed because they weren’t my cool plastic cylinders that I wanted to use, so I went BACK to A.C. Moore to buy some more bags and hard plastic sheets that I was going to use as a base and after all that ended up using the bags from NY Cake. In the end, they all got bagged and not sealed (the bride to be had ribbons and tags for them she wanted to attach) and they were delivered safely into my office, I got paid, the bride to be was thrilled, and I felt like a GIANT weight had been lifted off my shoulders once it was over.

I think a more giant thank you is deserved for dealing with me as I was totally freaking on Monday with the packaging madness, so huge thank yous go out to Lisa, Jay, Lisa’s mom, Lisa’s alleged brother, & Kenny for thinking of and looking up places where I might find packaging and calming me down. 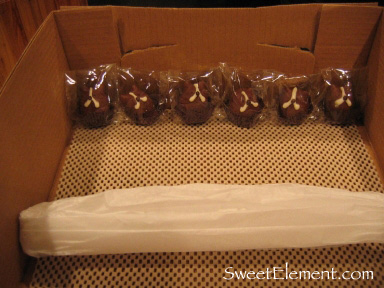 “Pretty Dogs All in a Row” – safely packaged on no-skid and with a buffer of tissue between each row so their faces would be protected. 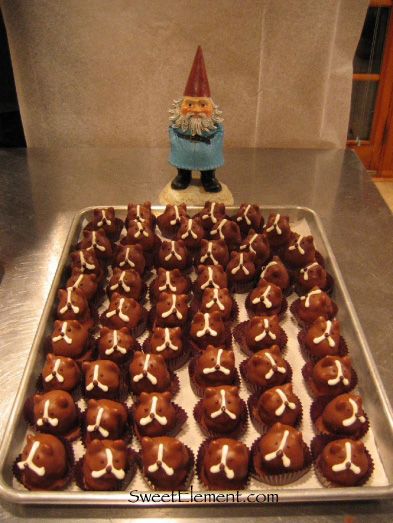 “The Travelling Gnome Blessing the Dogs for Safe Travel”